Jon and I have now been married for 8 full years and are starting our 9th. It seems crazy to know that we have been married this long already. Years go by so fast. On the 30th, Jon and I went to the movies, and then picked up dinner at Bombay House our favorite restaurant. It was a nice quiet evening.
It has been a wonderful 8 years, and am looking forward to the next 8 and more. Life is great when you love and when you are loved in return.
Posted by Jon and Maeva at 11:38 PM 1 comment: 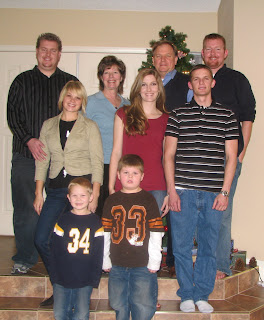 This year we spent Christmas with Jon's family in Las Vegas. It was good to catch up with Branon and Starr whom we hadn't seen for a long time. It was a nice relaxing trip. 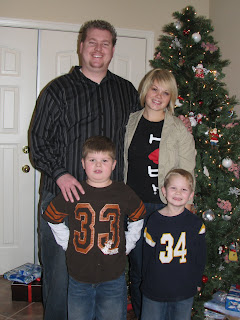 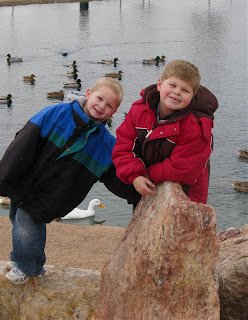 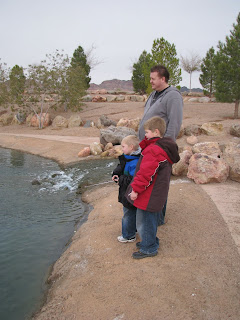 While we were in Vegas, we took Julien and Logan to a pond by Jon's parents' house, where we fed the ducks and played with a remote controlled boat. The kids had a lot of fun chasing the ducks out of the water with the boat.

After much anticipation Santa finally came. 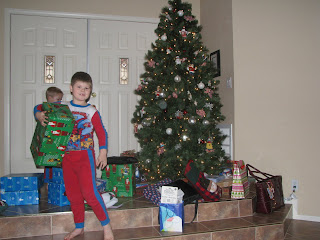 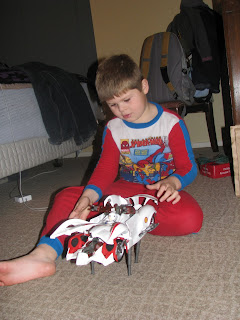 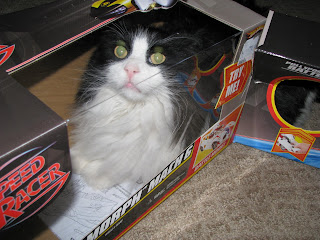 We were all spoiled for Christmas. Julien was happy to see that Santa remembered to bring him the Speed Racer car he wanted. I think Oswald was pretty glad about that too. He loved to get inside the box.

Once we got home to our little BYU apartment, we got a phone call from my parents saying that Santa stopped by their house too, and left some presents for us. The next day we rushed over to see what else Santa had brought us.

Logan opened up a nice long satin box, and discovered that he had gotten a real Harry Potter wand. When he saw what was inside, he was so shocked he was afraid to touch it. He believed he could cast real spells. And to this day he is convinced that on his 13th birthday he will go to Hogwarts to study magic. 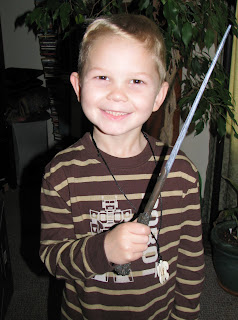 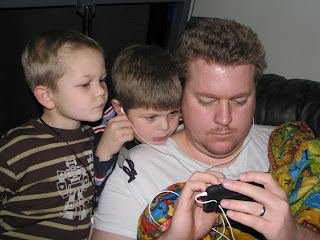 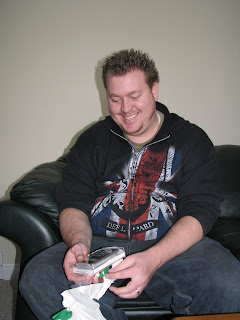 Jon was ecstatic to finally open his super cool new toy. A 16G IPOD Touch. I must admit... I wish I had one. He carries it everywhere. He put on the new Batman movie, has a bunch of fun games, pictures, and music on it, has the Internet; he even has the scriptures...it is so fun to play with. 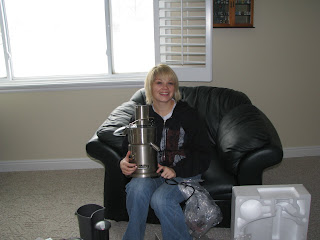 I was so thrilled to get my Breville Juice Fountain Elite 800JEXL juicer. It is so beautiful! I love to make juices. So far my favorite is definitely pineapple orange with a hint of strawberry, but I have also ventured off and made a carrot, celery, apple juice, and to my surprise it was not bad at all, it actually tasted rather sweet. Yeah! I feel so healthy.
Posted by Jon and Maeva at 10:14 PM No comments:

Day on the Highway! 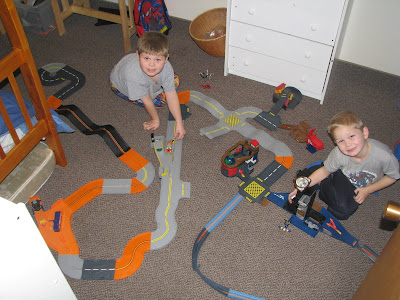 On a snowy Friday afternoon, the kids and I built a huge race track. It was so much fun to hook all of the pieces together and create something of our own. We then played cars for a couple hours. The track stayed on their bedroom floor for 3 days. They were sad to put it away, but I assured them that we would be able to make a cooler looking one later. They agreed!!
Posted by Jon and Maeva at 10:15 PM No comments: 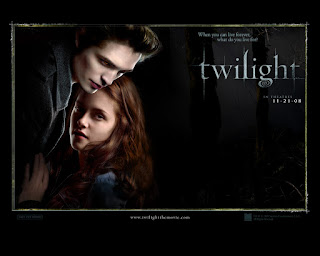 Can you believe it? After fighting it all this time, I finally gave in.

How it started! To be honest I was curious to see what all of the fuss was about. So I started reading the first chapter of "Midnight Sun: Edward's story." That is when I got hooked. In that one chapter there was so many emotions and feelings erupting from the character, that I wanted to know more about him and about his story. The next day, I picked up the first four books, and ten days later, I was through with the series. I literally did not eat or sleep for those ten life sucking days. And when I did sleep, I was dreaming about the Cullen (Vampire family.) I was consumed by the story and by the characters. I could feel myself becoming a part of the Cullen family (pale from not going out into the sunlight, not sleeping, not eating, having visions of the past-aka dreaming Twilight.)
The next Saturday, Jon and I celebrated me finishing the series by going out to eat at "Five Guys Burgers and Fries" and going to the movies to see Twilight of course. I must say Jon was relieved when I was done. He told me that he missed his wife for that week and a half.

Funny coincidence. The day I got done reading the last book, we received a letter from Jon's cousin from Washington, who's last name is Carlisle. I was so freaked out, I stared at the letter without opening it for a minute or two (yes! I was that obsessed). If you are not familliar with the book, the Cullen family is from Washington, and the head of the household of the Cullen family's name is Carlisle. It was just too many coincidences all at once for me.
Posted by Jon and Maeva at 6:11 PM 1 comment: