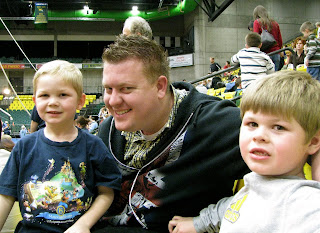 This past week, Jon and I took the kids to the circus. On Tuesday, I picked the boys up early from school. They did not know why or where we were going. Once we stepped into the arena, their little faces lit up with excitement. It was the first time they had gone to a circus. It was so fun to see their reaction. They got even more excited when they saw my parents, and brother Alex, take a seat next to them. 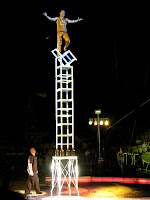 The performers did a good job; their stunts were very exciting. Logan and Julien both agreed that their favorite parts were the motor cross guys in the cage, and the man walking on the big wheel.

Jon even did a little stunt himself. He volunteered to get "hypnotized" and did a counter balancing trick with other volunteers. The kids enjoyed watching him.


Overall it was a cheap fun family activity, I had coupons so we paid 18 dollars for all 4 of us to get in. Of course the extra activities there were a little outrageously overpriced, like the elephant ride for 8 dollars a piece, or the face paint for 6 dollars... . The kids did get to ride the elephant. I was a little more willing to pay such a large amount by trying to make myself believe that at least the elephants will get 18$ worth of food from us that night (if only it worked that way, right!). 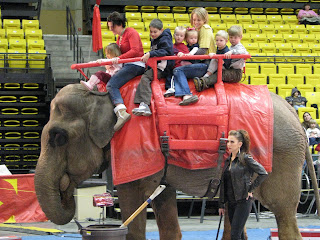